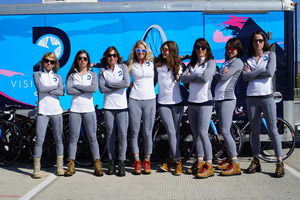 "We're thrilled to support the women's riding community with the creation of Visit Dallas Cycling," said Dallas CVB President Phillip Jones, a fitness enthusiast and triathlete. "Dallas is full of great green space and bike trails, and I can't wait to cheer the riders on as they represent the city."

Since the launch of the BIG Things Happen Here brand two years ago, Dallas has been growing in recognition as a destination for travel and leisure, meetings and conventions. In addition to traditional marketing efforts, the Dallas CVB strives to promote the brand in unique ways and capture new audiences, and the FCS Cycling partnership is an ideal fit for the city.

With more than 100 miles of beautiful and diverse urban hike and bike trails, and more under development, Dallas is recognized is a vibrant and energetic city with many options for an outdoor, fitness-focused lifestyle. Additionally, the temperate climate makes it ideal for rides and activities year-round.

"Dallas is a great place, and I hope that, as a team, we can bring attention to all that the city has to offer, and draw awareness to cycling in general," said racer and team manager Rachel Byus.

"Having support from the Dallas CVB is a fantastic opportunity for our team and illustrates the city's commitment to an active lifestyle and female athletes," said team racer Anna Grace Christiansen. "We are proud to be healthy, adventurous, positive advocates of Dallas."

The team's custom uniform - called a kit - was unveiled in February at the Visit Dallas Cyclingkick-off event in Dallas. The magenta and navy blue kit prominently features the Dallas skyline, highlighting the Margaret Hunt Hill Bridge and iconic Reunion Tower.

"A powerful city deserves a powerful team, and we'll wear the skyline proudly," said rider Mia Manganello. A powerhouse in her own right, Manganello was a National Championship speed skater, having participated in two Olympic Trials before taking up road racing.

The Dallas brand will be seen in many of the city's key markets as the nine-rider team wears the Visit Dallas Cycling apparel while training in their home states, including California, Colorado, New Mexico and Texas.

Additionally, the team will travel in Visit Dallas branded vehicles as they compete in races in additional markets, including Fayetteville, Redlands, Silver City, Tulsa, Bend and Washington, D.C.

Along with the professional team, FCS Cycling club members in Dallas will sport the Visit Dallas Cycling kit while riding and training in the city, making another 80 cyclists traveling billboards and ambassadors for the Dallas brand.

The team's next race is scheduled for March 27 in San Dimas, California. For more information and to see full team member biographies, please visit www.visitdallas.com/visitdallascycling.

About Visit Dallas
The Dallas Convention & Visitors Bureau's goal is to market Dallas as the ideal convention and visitor destination to the regional, national and international marketplace and to favorably impact the Dallas economy through meetings and tourism. The Dallas metro area is the leading business and financial center in the Southwest, offering visitors an unparalleled array of amenities such as more than 75,000 hotel rooms, flexible meeting space, moderate climate, service-oriented staff, and a central location with two major airports with more domestic nonstop flights than any other U.S. city. As the ninth-largest U.S. city, and part of the fourth-largest metropolitan area in the nation, Dallas provides the best shopping in the Southwest and an arts district made up of 20 square blocks of artistic and cultural destinations, with five cultural venues designed by Pritzker Prize-winning architects. The Dallas metropolitan area is the top visitor destination in Texas and the only in the Southwest to host teams representing five major professional sports leagues.